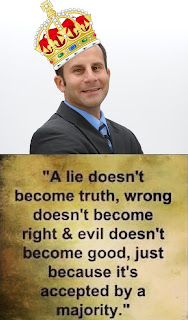 ...your crown is starting to slip.

Yesterday's interview on Talk of the Town truly revealed a lot about the person at the helm in the Town of New Hartford. I have learned over time who Paul Miscione is; he is now starting to reveal himself to town taxpayers.

It is sad that our town supervisor has once again decided to become a part of "fake news" instead of standing like a man and admitting he was wrong.

My email to the town board and town attorney on Tuesday, July 27, 2020 makes it abundantly clear that there are ethics violations.

Miscione should take note that his "no" vote and lies did not remedy his situation.


Just listen to Miscione's blathering on the Talk of the Town...


FOILed documents and videos of town board meetings clearly show that Miscione was in it up to his eyeballs and he lead the crusade to bring this development to Woods Highway.

Town Board minutes, if they were available to the public and uncensored, would reveal that Miscione was not only the cheerleader, but he clearly stated at the July 22, 2020 town board meeting that he was going to vote "yes".

If he was truly a "no" vote and recusal wasn't necessary in the first place, why did it take a year of meetings (both in view of the public, and behind closed doors) only to get to a denial after a second vote of the town board?

Miscione claims that the footprint for the project was now reduced and no longer abutted his property; therefore, unlike the February 5, 2020 vote, he could vote at the July public hearing.


"pertains to property located on a parcel of land 26.6 acres in size off of Woods Highway"

By the way, the parcel never was officially split and there was no indication that it ever would be...the size of the project always seemed like a moving target and the latest public hearing notice appears to be wordsmithed to create an illusion.

If Miscione was a "no" vote, why was Conifer made to jump through so many hoops? And let's not forget that Conifer had already appeared before the Planning Board who had already preliminarily blessed the project or it would not have been before the town board in the first place.

A. All proposed amendments, supplements or changes originating by petition or by motion of the Town Board shall be referred to the Planning Board for a report and recommendation thereon.

Is Miscione saying his Planning Board thought it was a good idea on the surface, but he never did like the project...I highly doubt it!

Besides, Miscione, it is perception that counts. Anyone with a modicum of brains could figure out what was going on! You insult my intelligence, sir!

I just listened to Talk of the Town. Thank you for providing the link. Too bad this was a radio interview. I would have preferred a television interview to see if his nose was growing as he spoke.
What was the final vote? Only saw Miscione’s ‘no’ vote on WKTV. Interested to see if the two ‘yes’ votes from February meeting now fell in line with the leader.

Lenart voted no this time, but Reynolds continued to vote in favor; he was the lone approval vote this time. Messa and Woodland once again voted no.