The king was in his counting house counting out his OUR money... 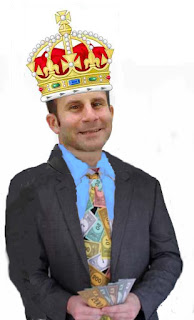 Nice article in the OD regarding renovations at the Rec Center....


1. In the article, Miscione says, "the renovations are funded through roughly $180,000 in savings the town has accrued yearly by having him function as head of the parks department along with his role as town supervisor."

2. He is using town personnel to do the work but we don’t know who...that is another issue I won't get into right now. I have tried schooling Miscione on this several times...hasn't worked yet.

3. If we are using town employees, is the $180,000 all for supplies? How did the town obtain these materials...bidding; piggy-backing off another municipality; or merely using the town's credit cards? I guess I could check the town board minutes...oh, snap, there haven't been any town board minutes available since last October. Darn!

4. So supposedly Miscione has "roughly $180,000 in savings the town has accrued yearly..." which is being used to fund this project. So how do you accumulate fund balance for a position (Parks Director/Rec Director) that you no longer fund with tax dollars in the annual budgets? Did something change in Budgeting 101 since I retired? Um, I think that is actually called using fund balance.

4. Previous year’s savings are this year’s fund balance more commonly known as the “rainy day” fund. If Miscione is using savings from previous years, there are only 2 ways to do that legally. Appropriations in the current year’s budget or a town board budget transfer listing the fund(s) to be used prior to expending the money.

Miscione cannot just move money around whenever he feels like it; he gets his authority from a majority vote of the town board.

The 2020 General Wholetown Budget shows $374,400 of fund balance as anticipated revenue to be applied to offset the 2020 budgeted appropriations. It is unclear what part of the General Wholetown budget that money was initially earmarked to cover, but a good guess is that it is supposed to offset some of the $889,375 bond principal and interest that is due this year. There does not appear to be a $180,000 expenditure in the Parks or Recreation Center budget that needs to be offset with fund balance.

To sum up...the town apparently has used Willowvale pension funds; sewer district money; fire district 1 & 2 phony deficit money; lighting district money; Higby Road Water District users have been taxed extra money to pay principle on a 0% interest bond (whether or not that money is really still available cash is yet to be disclosed to the public); siphoned earned interest from several funds without reporting the income in the financial statements; plus several financial statements contain incorrect and misleading statements; and Miscione can be heard on videos of town board meetings lamenting over the decrease in sales tax revenue due to the shutdown.

Oh yeah, taking all that into consideration, it makes perfect sense to use unbudgeted “rainy day” funds to pay for “niceties” that are not essential right now and might make more sense for next year.

Overspending rainy day funds without town board authorization seems to ring a bell...where do I recall that to have been a problem in the past?