except in this case it will be $600,000 bonding by the Town of New Hartford and $500,000 taken from other developers' Fees in Lieu of Mitigation...all to help a private developer's dreams come true.

Of course, if you listen to Tyksinski and Adler, all OUR dreams will come true soon too. The Observer Dispatch reported:

Once the access is improved with the two projects, the business park will help the town, Tyksinski said.

“You’ll see some new development going up there,” he said.

We can hardly wait...there has already been so much benefit from The Hartford moving in the business park...about a mile from where they were previously located. Isn't the building previously occupied by The Hartford now owned by a non-profit that pays no real estate taxes?!!

The 2008 resolution was passed around the table. Each of the four council members silently studied the bonding resolution looking like "deer caught in headlights". However, when all was said and done, they all said 'aye' to Supervisor Tyksinski's proposal.

Imagine...Supervisor Tyksinski was able to convince 4 other elected officials to vote to spend additional public money for a private developer even though as of today there is no current independent report on the financial condition of the town and there hasn't been one since 2008!

To top it off, we have blogged numerous times about Adler's refusal to make the town whole on some of his debt from the last bonding. Our elected officials are certainly looking out for us, eh?

Anyway, an article posted on the Observer Dispatch website tonight and probably to be in tomorrow's print edition says:

That's amazing! If you believe Tyksinski, Adler should have no costs over and above the $1.1 million town contribution. 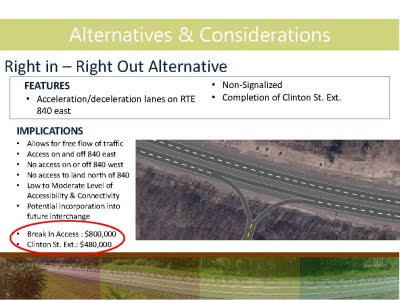 Just in case you didn't attend the November 5, 2009 Public Hearing or even if you did, here is a copy of the slideshow presentation.

We have much more on the subject. To be continued...
Posted by New Hartford, NY Online at 9:59:00 PM

Has town officials heard of Article 8 of the NYS Constitution? What they are doing, on behalf of a private developer...appears to be more than just illegal?

What kind of conspiracy is going on with this current bunch of politicians.

These people are supposed to be the stewards of the town's funds.

When will someone come in and investigate this bunch?

Are the town officals utterly out of their collective minds? At a time when all municipal governments are searching for ways to ease their debt

.burdens ,this town is looking to take on additional debt. They can't be as stupid as they appear to be ,Mr. Adler must have some great pictures of the supervisor and council members or they are in fact unwitting pawns in Adler's game.

The greatest threat facing Americans today is not terrorism, foreign economic competition, or illegal immigration. The greatest threat facing Americans today is the disastrous fiscal policies of our own government; local, state and federal, marked by shameless deficit spending and borrowing. If Americans wish to be free of the economic burdens placed upon them and future generations, they must at least develop a basic knowledge of the how the economy really works and the proper role of government. The present state of affairs is a direct result of our collective ignorance and apathy.

HO HO HI HO!Its off to work I go! If I could find a Job to pay these TAXES what to hell are they thinking?

Great work Cathy and Ed, you put the OD's Bryon Ackerman to shame!

Could this be New Hartford in the very near future? Too bad Tyksinski and his merry band of spineless weasels on the town board lack the moral character,conviction and intelligence to do what's right. http://www.reuters.com/article/2011/08/01/us-rhodeisland-centralfalls-idUSTRE7703ID20110801